skip to main | skip to sidebar

This girl is hilarious, talented, smart, tough, beautiful and armed to the teeth with grit.
Oh and shes my girlfriend... YUSSSSS!


More bg's from stuff in the making at Style5.tv.

I had less than two weeks to finish 41 layouts and paint the final bg's for this Style5.tv project.
Gauging workload vs. time / budget is becoming a cool part of art directing and the limitations sometimes lead to unexpected results. For example, I had no idea I could draw this retarded!
Here's a character lineup and some ambiguous backgrounds.

The keyword while designing for this project was to keep things super simple to make life easier for my buddy Christian who had to animate everything in a crazy rush. We had a common vision and aside from occasional constructive criticism, we allowed each other complete creative freedom.
In other words I didn't redo anything  =  I had FUN!

(btw. no alien designs 'cus you saw 'em plenty in the short)

/Above. I like the idea of a spaceship being just a stack of wings. Oh ya and it looks like a Christmas tree which it had to, so it worked out.

\Below. Some unrelated but wintery bg's I did last year for the guys at Yowza Animation.

...and a politically correct Happy Holidays and Seasons Greetings to everyone!
My friend Christian and I did a little celebratory animation and we hope to do more in the future. Stop by soon for some making-of stuff, if you'd like.

Dear Internet, sorry for neglecting you for so long but things have been busy. Here's a shot I did tons of time ago as part of a bumper for TAAFI.

Character lineup & bg's for a teaser in progress.

Hello World, it's been a while but now I'm back - as usual.
A lot has happened since the last post but most of it is irrelevant if you don't know me so I'll stick to work related matters. I am back living and working in Toronto at Style5.tv, where I have been allowed to design my little heart out on a project in development. Being a character designer on this project is pretty much exactly what I wanna do for a living when I grow up, which is good, cus I am... both!
The two guys in the first picture are the main characters of "Rumblecat". The rest is exploration.

/Above. A canadian Polar Bear who wishes he came from the states.
\Below. Antonio El Tigre.

/Above. There must be at least ONE Panda out there exploiting the goodwill that comes with being a nearly extinct cute and fluffy animal.
\Below. If animals had a human brain, would they still be cool with this?

My first job out of school was at Nørlum. Technically I already worked there part time during my final exam which may seem like a questionable choice, but it turned out okay!
I got the chance to art direct a corporate identity short meant for internal use only. This is some of the development and character design I did.

The graduation film I worked on last year was released on Vimeo a few weeks ago. You can find it here. I did a video to show my contribution to the project.
Most of it is development work, some of which didnt make it into the final film.
Anyway, either way, here it is.
2 comments

Oh, and a super old gif I found during virtual winter cleaning.
6 comments 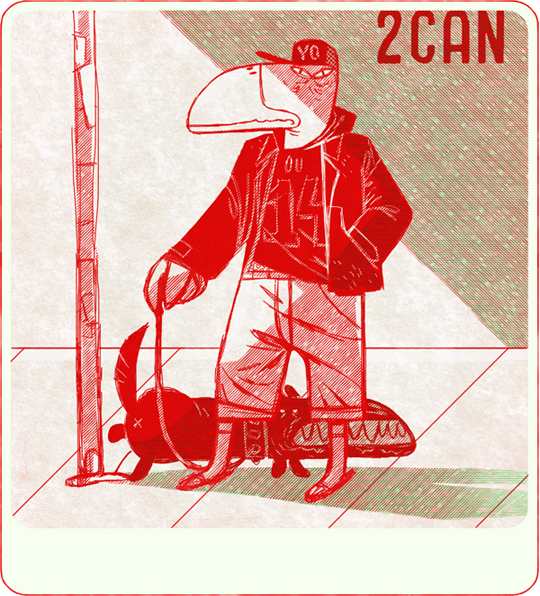 He's a rap-tucan and his dog is pissed.

Kristoffer W. Mikkelsen
Currently in the final semester of my MFA in Computer Art at School of Visual Arts, New York, focusing on art direction, visual development and character design [graduating May 2015]. Recieved a BAA in Character Animation from The Animation Workshop, Denmark in 2012. Previously interned at Framestore, London as a concept artist working on the early preproduction of Disney's Maleficent. Went on to art direct and oversee production at Style5.tv in Toronto, Canada (2013). Recently worked as an animator on Cartoon Saloon's Academy Award nominated feature, Song of the Sea. Lastly I worked as a visual designer at Apple Inc, CA.